On a warm summers day there’s no better place to be than the Cherwell Boathouse. The Lower Boathouse is a spectacular riverside venue, intimate & atmospheric, set alongside the River Cherwell in Oxford. In this context it lends itself readily to summertime music & theatre art events.

This is our fourth season of summer events in the Lower Boathouse. For this years fourth installment, join us for drinks, nibbles and some wonderful wine stories woven in to a musical show!

WINETOWN. Presented by the effervescent singer, writer and performance poet, Nicola Harrison and the starry guitarist, Gerard Cousins, here is a sparkling tale of twelve different wines, each with their own unique character and musical interpretation. Combining a whole set of specially commissioned songs and poems, musical storytelling and improvisation, winetown is a joyful and charming celebration of the glorious grape that will delight wine lovers the world over. A perfect bijou event for music, poetry and wine! 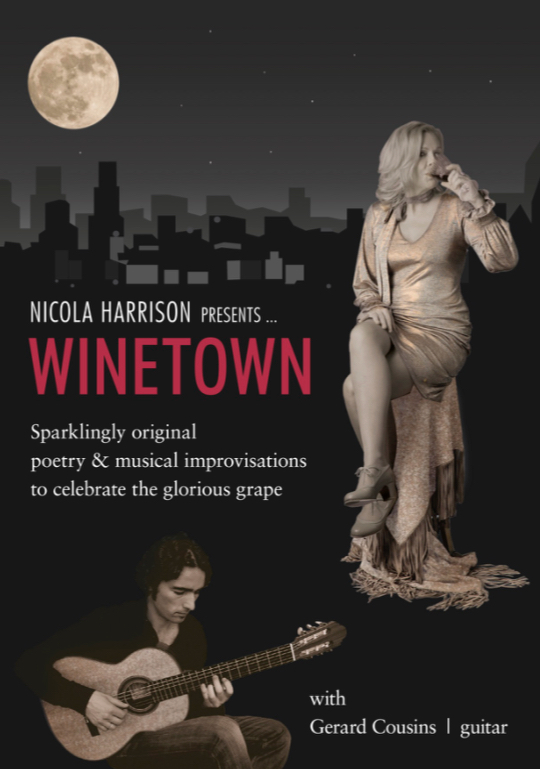 Singer, author, scriptwriter, musician and performance poet, Nicola is Lecturer in Song and Interpretation at Pembroke College, Oxford. She writes poetry and scripts, creating and directing work which focuses on the magical interface of poetry, words and music and has written for radio, national newspapers and magazines. She is a regular contributor, among others, to publications such as Classical Music, British Music and BBC History magazines.

Two books, The Wordsmith’s Guide Poetry Music and Imagination (2016) received extensive media coverage as definitive works in the exploration of poetry and music. Her last show Margarita and the House of Love toured the UK with sell out performances. She has performed the poetry and songs of the Spanish writer Federico Garcia Lorca at the British Flamenco Festival. Her recordings of Spanish songs have been used in the documentary War is Beautiful.

She is known for her impeccable crossover productions of words, music and song. Nicola’s two bijou collections of poetry, Winetown and The Becoming have just been published and Winetown will be available for purchase at the show.

Gerard Cousins is an international guitar competition prize-winner who has toured Europe and South America as a solo guitarist. As well as a virtuosic performer, Gerard is a composer with four widely reviewed solo CD’s to his name. He has often appeared on Classic FM, BBC Radio 3 and performed, among other venues at the Purcell Room, the Bolivar Hall and St David’s Hall, Cardiff. ‘Passionate, profound, with a great range of tone’ (Classical Guitar Magazine). ‘Cousins has reached a rarefied point where his stunning playing is matched by his artistic vision” (Acoustic Magazine).

Nicola and Gerard have collaborated on past projects and performed together at an array of music and arts clubs and festivals, at venues such as The Stables, MK, Institute Cervantes, Chelsea Arts Club and the West End.

WINETOWN is an entirely new piece of entertainment, full of delight and droll humour combining the original verse, music and improvisations of two virtuosic and inventive performers.

Why not make this a special day and book (booking in advance is advised) for lunch or diner in The Cherwell Boathouse Restaurant. You could even hire a punt from the Punt Office before or after lunch, enjoy the River Cherwell and it’s beautiful scenery. MAKE THIS A SUMMER TO REMEMBER!

12 wine performances comprising music, poetry and song are accompanied by 5 wines & nibbles. These 5 wines are all featured in the show. There will be a half hour break in the middle of the event.

THIS IS A TICKET ONLY EVENT – £25 (bookings in advance)

(extra drinks can be purchased from the bar)

PUNTING HOURS: 10am – dusk (no bookings)

(bookings in advance is advised)